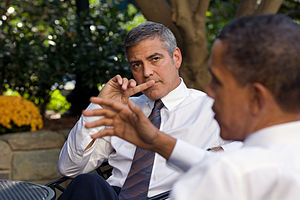 Yesterday, President Barack Obama flew to Los Angeles to attend a fundraising dinner hosted by actor George Clooney.  The $40,000-a-plate soiree is expected to bring in $15 million for the president’s reelection campaign.

While that’s a nice chunk of change, it really is a drop in the bucket to anyone either running for president or trying to get reelected.  The media buzz, however, can be worth a lot more—or not.

The Oval Office has had a long love affair with Hollywood, starting back before the famed 1938 meeting between First Lady Eleanor Roosevelt and 10-year-old actress Shirley Temple.  Celebrities and presidents always got along nicely, as long as they shared the same politics.

Americans love movies and the star actors that shine in them.   A litany of entertainment-based TV shows and magazines demonstrate a huge market opportunity for the celebrity segment, which means lots of potential voters like to watch or read news about their favorite actors.

No doubt there is a risk-reward factor by aligning with a celebrity, especially if you’re the president.  Fortunately for Mr. Obama, George Clooney scores high in the DBI Index, a ranking that measures the ability to influence brand affinity and consumer purchase intent.  Basically this means Clooney is an admired, trusted source.

The reality is that an alliance with Clooney probably won’t get President Obama more votes this November.  The American public hopefully will vote on a presidential candidate’s political platform, rather than solely by the company he or she keeps, although George Clooney seems to be a pretty cool guy nonetheless.

What Thursday’s fundraiser will do however is give the president more cache and a broader reach to voters who may not necessarily tune in every Sunday morning to get the latest scoop in Washington, DC.     And in politics, votes are the highest currency, not dollars.