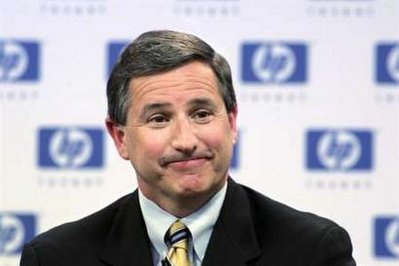 This past weekend, HP’s head honcho Mark Hurd abruptly resigned as CEO of the world’s largest technology firm, amid a firestorm of controversy involving actress-turned-marketing consultant Jodi Fisher. Surprisingly, it’s not Fisher’s 2007 sexual harassment case against Hurd that led to his ouster; it was filing faulty expense reports, a violation of HP’s business conduct standards.

That’s too bad for HP investors.  Hurd was a hit on Wall Street.  In the five plus years as CEO, Hurd restored Hewlett Packard to profitability, more than doubling the stock value, mostly due to his no-nonsense business approach.  HP’s stock dropped more than eight percent since the news of his dismissal became public.

Coincidentally, Hurd’s predecessor Carly Fiorina, now a candidate for the U.S. Senate, also was ousted by the company’s board.  Fiorina’s departure however was tied to poor performance, a long-standing issue while she was CEO, and primarily due to her inability to fully leverage the company’s acquisition of Compaq in 2002.

The trick now for HP is to find a successor to Hurd.  The challenge however is to manage the transition with effective communications.   Could HP’s recent stock drop have been prevented?  That’s debatable.  Hurd had a big influence on company performance, especially with investors.  Now that Hurd’s gone, stock valuations may indeed have been affected.

BP’s oil spill disaster strikes a similar tone.  The fact that the company was losing revenue because it could not cap the oil leak, obviously affected the stock price.  Poor communications coupled with an aloof CEO, only fueled the fires with the general public, inciting boycotts and a barrage of bad publicity, probably adding to the stock’s decline.

It’s hard for any organization to manage a crisis, whether it’s a CEO scandal or an organizational disaster.  Public relations is essential in these matters, especially helping a company “stop the bleeding,” and properly communicate to its target audiences, which may include employees, shareholders and investors, partners, and the general public.  Even a tweet can go a long way.  But it has to smart and sincere or can be perceived as contrite.   HP seems to have started the ball rolling as it transitions to new leadership.  The outlook for next earnings on August 19 seems pretty good.  After that, it may be a different story.