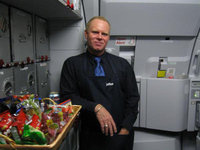 JetBlue Airways always has been an airline of firsts.  The JFK-based company was the first airliner to offer 24 channels of free, live satellite television at every seat.  The first domestic carrier to provide complimentary in-flight e-mail and instant messaging services.  It also was the first airliner to introduce a customer bill of rights.  And just two weeks ago, JetBlue was the first airline to have one of its flight attendants tell its passengers to take this job and shove it and dramatically exit the plane via emergency chute.

JetBlue prides itself as being an unconventional airline.  The company has been hiring former emergency responders like cops and firefighters since it was founded 10 years ago.  Flight attendants with this type of experience can be a big benefit in the post 9-11 airline industry, especially dealing with stressful and volatile situations.   Steven Slater, the veteran flight attendant who literally jumped ship, ironically wasn’t one of them.

The story continues to make national headlines in traditional media as well as in the blogosphere.  The overarching sentiment is that most people admire and can relate to what Slater did, even asking JetBlue to give him his job back or use him in some type of satirical ad campaign.  Slater since has over 200,000 fans on Facebook.

The chance of Slater appearing in a JetBlue commercial seems pretty slim. Although funny as it may seem, Slater could seriously have hurt bystanders or workers on the tarmac as he exited the plane through the emergency exit.

JetBlue is taking the situation in stride and downplaying Slater’s actions.  The company is not commenting on the case  because it’s an ongoing investigation and that JetBlue wants to “honor the privacy of the individual.”  JetBlue’s response to date is a brief blog post asking readers if they heard about “a little story about one of our flight attendants?”

JetBlue’s blog response may be the only option at the moment.  The New York-based airline is allowing the media and general public to form opinions about the now infamous and very popular Slater.  While this may be good “public relations,” and gives the airline some breathing room as it contemplates next steps, JetBlue at some point, sooner than later, will need to fully address the issue from a corporate perspective.

Otherwise, JetBlue runs the risk of continued jokes, which may be unavoidable nonetheless.  It also shows that the company is not responsible for its employees, whatever their actions may be.  The end result may be that the Slater story gets even bigger, and a formal response may be too little too late.