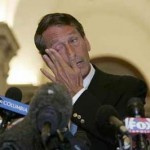 No longer are voters putting politicians on pedestals.  The Clinton-Lewinsky scandal first demonstrated the Country’s indifference to a politician’s marital infidelities so long as he or she was properly doing their job.  President Clinton would not be impeached for having an affair; lying under oath, well that’s a different story.

South Carolina Governor Mark Sanford is the latest elected official to publicly get caught in an illicit love tryst.  He secretly went to Argentina for a private meeting with his mistress over Father’s Day weekend.

Early statements from Sanford’s staff indicated he was hiking the Appalachian Trails.  How this information was derived is still unclear. But this case goes beyond cheating on his wife.

Is it possible in 2009 for a U.S. governor to slip out of the country unnoticed?  Hindsight shows No; Sanford should have been forthcoming about his Argentina trip at the onset.  The real issue at hand is the communication misstep.  Did Sanford mislead his cabinet about his whereabouts?  Or, did Sanford’s staff cover up for him?  Either way you cut it, someone dropped the ball.

The reality is Sanford put South Carolina at risk by not informing his cabinet and especially his lieutenant governor Andre Bauer of his South American rendezvous even though he later apologized for keeping them in the dark.  By withholding this information, he put the state at risk and ultimately, his affair affected his job as governor.  Sanford’s case may be the exception to the usual voter indifference to political sex sandals.