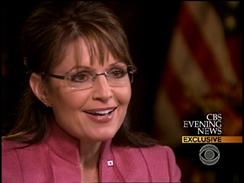 While the book sits number one on top of Amazon’s best-seller list, “Going Rogue” isn’t even mentioned on the New York Times’ book index, an ironic depiction of how Palin’s memoirs have been viewed by those who do not support her.

She has many followers however. Just take a peek at her Facebook page and you’ll find that Sarah Palin has 1,057, 066 fans, a sobering wakeup call into the former Alaska governor’s true popularity. Despite her fame, most people feel Sarah Palin is not qualified to be president. Many believe it was the Katie Couric interview that sank Palin. Even though Americans gave her another chance, they still weren’t impressed by her knowledge, or lack thereof, of domestic and international issues, and ultimately did not vote the McCain-Palin ticket last November.

Palin is now on a multi-city book tour, mostly hitting conservative towns across the country. Reviews of “Going Rogue” have been less than favorable, often describing the book as “petty” and “revengeful,” rather than some kind of political manifesto outlining Sarah Palin’s issue platform.

She is no dummy either. Even though the chance of her running for president in 2012 is highly unlikely, much of the continuing media coverage is focused on a possible candidacy. This media phenomenon undoubtedly helps sell more books as the fascination with Sarah Palin grows.

Palin needs to watch the media frenzy however. Too much coverage coupled with a negative perception will not only deter media interest, but damage her credibility among her own supporters, which is an essential lifeline to continued book sales or political aspirations, neither of which will have the success of recent events.