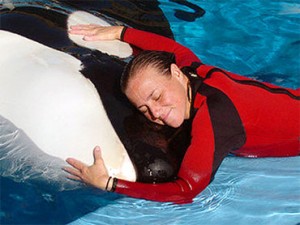 It’s hard not to be affected by the tragedy at SeaWorld Orlando this past week, when trainer Dawn Brancheau was killed on Wednesday by Tilikum, a 12,000 pound orca and star of the park’s multi-media “Believe” water show. The killer whale grabbed the trainer’s ponytail and dragged her underwater until she drowned.

Thousands of comments immediately hit the Internet as the news broke about Brancheau’s death. Many were appalled but none really blamed the killer whale, citing the attitude that these animals should not be held in captivity, a telling tale of the true sentiment towards SeaWorld.

Making matters worse, reports now are surfacing of two other deaths linked to Tlilikum since 1991. This creates sort of a conundrum for SeaWorld, because nothing can really be done to the animal or to prevent another attack, although the water park is reevaluating its operating procedures and has opened up an investigation into Brancheau’s death.

The Shamu show resumed this Saturday with a video memorial dedicated to Brancheau. There also have been condolences and deep regret offered by SeaWorld Parks and Entertainment CEO Jim Atchison and SeaWorld Orlando’s President Dan Brown. Despite numerous links to deaths however, Atchison said in a press conference on Friday that Tilikum will remain an “active, contributing member of the team.”

No doubt the Shamu brand is big business for SeaWorld. This was evident as the company reopened the show, only after a two-day hiatus. Even though Brancheau’s family considers this tragedy an accident, SeaWorld’s actions to quickly reopen “Believe” might be viewed by some to be the move of an insensitive corporation, rather than that of a research facility.

Getting back on track is essential for any organization that has undergone a crisis. The longer SeaWorld’s Shamu exhibit stayed closed the more negative attention it would have attracted. Right now company officials need to communicate that SeaWorld provides a proper environment for its orcas, a message point that might not be so easy to deliver, especially among animal rights groups. At the same time, it can’t downplay the seriousness of Brancheau’s death, even though the 40-year-old trainer knew the risks. Otherwise, SeaWorld won’t escape any “circus act” stigma it may have attained over the past decades.