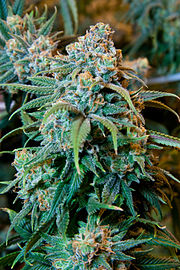 Pot is turning into big business with many beneficiaries ranging from growers to dispensaries.  Local governments are getting into the biz too.  Eighteen states plus the District of Columbia have approved marijuana for medicinal purposes.  Moreover, Colorado and Washington recently have fully legalized the drug for recreational use. The trick now for municipalities is defining an acceptable tax structure.

At the end of day, however, marijuana is illegal according to federal law.  Still, the majority of Americans (52 percent) favor legalization for recreational use, according to the Pew Research Center, a number that has grown by 11 percent from three years ago.

While the survey found that many younger Americans ages 18-32 years old support full legalization of marijuana (65 percent), baby boomer buy in for legalizing pot has grown to its highest level (50 percent) since a low of 17 percent in 1994.

Clearly, momentum has shifted and the public’s perception of pot is at an all-time high, no pun indented, even though President Obama is opposed to federal legalization.

Pot proponents say legalization is inevitable and it’s only a matter of time before Congress fully embraces cannabis. The flip side is parents and antidrug advocates say marijuana is dangerous and leads to violence and the use of harder narcotics.

No doubt the marijuana industry has an uphill battle and most likely will continue to take a state-by-state approach toward full legalization.  Aside from the positive medicinal outcomes of cannabis use, the tax income potential may be a key selling point for cash-deprived congressional districts.  Although with Los Angeles recently taking a more conservative approach toward legalization in a recent ballot initiative, the road may a little longer than expected.