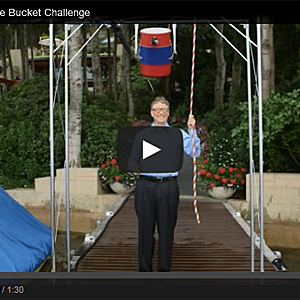 Brave souls dump buckets of ice over their heads while nominating others to do the same. There are no formal guidelines, although unofficially, participants who accept the challenge are asked to donate $10 and those that “chicken out” to give $100.

No doubt the ALS Ice Bucket Challenge has spread across social and traditional media channels like wildfire. Celebrities, high-profile CEOs, TV anchors, talk show hosts and sports figures have accepted challenges, even President Obama donated to the cause.

The campaign seems to be working. The ALS Association reports that in the three weeks ending August 18, it has raised $15.6 million in donations, compared to $1.8 million during the same time period last year, adding 307,598 new donors.

Now people are trying to “out challenge” each other, finding interesting and creative ways to dump buckets of ice over their heads. Many of these videos go viral, some racking up over six millions views on YouTube, like when Microsoft’s founder Bill Gates accepted the challenge.

The buzz is building. Hundreds of thousands of videos have been uploaded to YouTube, generating tens of millions of views, followed by millions of Facebook posts and tweets. Even a simple Google search on the Ice Bucket Challenge revealed close to 60,000,000 results.

But is it enough? While $15 million is a heck of a lot of money and a great return on investment, there may be a disparity between the amount of impressions generated and money raised. Although more participants are directing people to the ALSA website, many still aren’t aware of the campaign’s call to action: donate.

Strike while the iron is hot. While updating media on the status of fundraising is important and generates news, executives from the ALS Association, along with relevant celebrities, sports figures and business people, can mount an offensive by appearing on national TV shows not only discussing the campaign, but ALS as well and how people can get involved besides the Ice Bucket Challenge. If possible, Stephen Hawking can be a home run, even promoting his upcoming bioepic, “The Theory of Everything.”

While this tactic already may be in effect, the ALS Association needs to use the buzz generated and refine its key messaging so that more Americans understand its mission and the Ice Bucket Challenge’s call to action. If not, then we’ll just have lots more people dumping buckets of ice over their heads, at least until the winter comes.