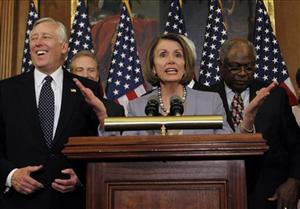 Congress was the biggest loser this past midterm elections.   The legislative body’s approval rating dropped to 17 percent after November 2, compared to 21 percent before the elections, according to new Gallup poll.

It wasn’t the American people’s dissatisfaction with the Democratic Party that led to the Republican romp giving the GOP control of the House.  Ironically, Democrats consistently have given Congress higher ratings than Republicans and Independents since President Obama and the then-newly elected Congress took office in February 2009.

The main reasons for the turnover are a national unemployment rate of 10 percent coupled by a hostile legislative environment. Quite simply the American people are fed up and did everything they could to oust incumbents, sometimes at fault knocking out more qualified candidates.   This was evident in some races when Republican incumbents were ousted by Tea Party candidates only to lose to Democrats in the general election.

Adding to the drama, lame duck and first woman House Speaker Nancy Pelosi (D-California) is now running for minority leader.   She says that the work accomplished over the past two years is not done and wants to stay on and fight against legislation repeal which may inlcude healthcare.

Whether or not Pelosi will secure a leadership position is unclear, although members of her own party are suggesting she back down from the race.   Some Democrats feel that Pelosi signifies a combatant persona and that new leadership is needed for the Democrats in the House.   This way, blame can be put upon the Republicans for any lack of legislation and bipartisanship.    Basically, giving the GOP what it did to the Democrats for the past two years.

The ball is in President Obama’s court right now.  He can choose to be antagonistic or work with the Republican leadership in next year’s Congress, although many would argue that he’s been doing that all along.   Either way, the American people will just have to wait and see how the volatile climate in Washington plays out as the new Congress starts work on January 3, 2011.