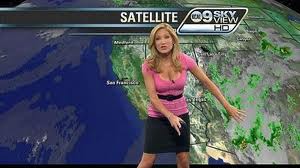 Ever watch the local weather report? Long gone are the quirky weathermen now being replaced by voluptuous bombshells. Not taking any intellect away from these beauty queens, but viewers can’t deny the eye candy appeal.

Why such a bold move? No doubt capturing eyeballs is priority one as more people go online to get their news and information. Ironically the internet has helped many local TV station increase market share.

The strategy seems to be working. Although viewership among local network affiliates dropped slightly from 2009 to 2010, independent local broadcasters yielded an increase, according to a recent study by the Pew Research Center. The study suggests that local stations now offering news may have helped the upticks in viewers.

Revenues are up too. Pew also found that local TV stations (17%) had the highest jump in revenues over the 2009-2010 period, compared to all other mediums including online (13.9%), cable (8.4%) and network television (6.6%). Newspaper revenues continue to spike downward, failing to adopt a successful business model to reflect the changed media landscape.

It’s difficult to quantify if attractive female weathercasters are the reason for local TV’s success, although the auto industry’s recent turnaround helped improve profits with a surge in advertising.

All news is local to some degree. In fact, 40 percent of all online ad spending is local, up from 30 percent just a year earlier, according to Pew Research Center.  Be that as it may, stations need to find creative ways for attracting viewers traditionally and online.  A sexy weather report may just be the answer.