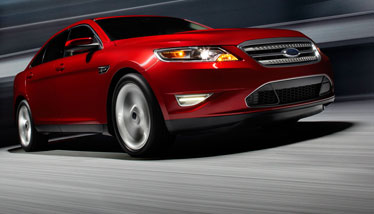 Few probably thought Ford Motor Company (F: NYSE) would be trading at $8 a share so soon after the auto pundits were plotting its demise.   Fairly positive returns and refusal to accept bailout money may be a couple of reasons for the recent stock uptick.

The company’s big bet right now is the new 2010 Ford Taurus.  This former best-selling vehicle in America recently was named “Car of the Year” by Esquire and just earned a top safety rating from the Insurance Institute for Highway Safety.

Ford has a tough job ahead however. While a very high percentage of consumers are aware of the Taurus, most recall the brand as synonymous with “rental car.”  Coincidently, the name officially was retired in 2006 because of severe brand damage but reinstated the following year when CEO Alan Mulally first arrived at Ford.

Competitors once called the Taurus “a flying potato” because of its rounded shape.  Consumers snubbed these critics by making the car a top-seller in the 1990s.  Can Ford do it again with its new design despite increasing layoffs and a steep credit crunch?

The good news is there once was a top-selling brand entering a very crowded and competitive marketplace. The not so good news is that this brand reintroduction is entering unchartered territory nearly 20 years later.  The real test will be sales and profit.  The question remains how long until Ford’s investment pays off?