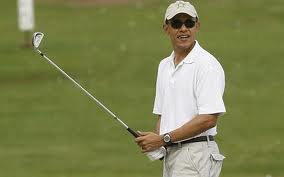 President Obama and Tiger Woods are a lot alike.  Both are worldwide icons who have seen their public personas rebound after a bumpy couple of years.

Aside from the current battle with House Republicans over expiring tax cuts set to take effect this Friday, the president is coming off a big election win.  And Tiger recently won a long-awaited tour victory while his home life seems to have improved as his golf game.

Little did they know their decision to play a round of golf last week would create a major hullabaloo among the White House press corps.  It seems that the beat reporters covering the president were locked out from reporting on the 18-hole match played at the Floridian golf course.

Only one golf industry reporter was allowed inside the Florida club to cover the president’s round with Woods, Floridian owner Jim Crane, and U.S. Trade Representative Ron Kirk.  The White House press pool saw this snub as yet another wedge being put up between the president and the day-to-day reporters that cover him.

Whether or not the president is actually shutting out the White House press pool is unclear, although this approach seems unlikely since it would be counterproductive to Mr. Obama’s broader communications strategy.  The president recently has been on a national tour, taking his economic platform directly to the people, battling the GOP-dominated Congress in the court of public opinion.

Hitting mainstream TV shows can be a proper strategy for the president, although he still needs to appear “presidential,” which can be a liability if not pulled off successfully.  A balance of doing hard news and consumer-focused interviews can provide a good mix of messaging, hopefully clearing through the clutter of noise within the national media landscape.

No doubt the president playing a round of golf with Tiger Woods is a great photo opportunity.  Who knows?  Maybe there could have been a larger story about two of the most accomplished black men in America if the event was open to other media.   But maybe that was the plan all along — two guys just wanting to play a round of golf.