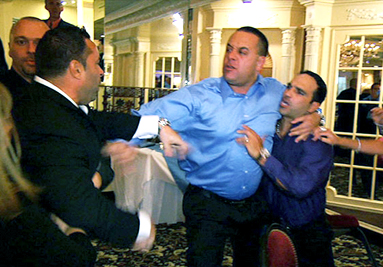 Bravo TV is reality television.  A look at today‘s schedule on Bravo shows every program is reality-based, ranging from “The Real Housewives of Orange County” to the network’s new series “Pregnant in Heels.”

It’s hard to comprehend the success of reality television these days but one thing is constant: drama. Last week’s premier of “The Real Housewives of New Jersey” did not disappoint.  Fist-fights, cursing and family strife all while perpetuating Italian-American stereotypes, created a frenzy among other news and entertainment outlets, generating additional publicity for the Bravo network.

The strategy is working.  People are watching ‘what happens next,’ which is Bravo’s new tagline messaging to viewers.  The NBCUniversal-owned network has carved out a true niche in the new world of reality television ever since its 2003 debut of Queer Eye for the Straight Guy, which hit 3.5 million viewers.  Gone are the days when the network primarily aired drama and independent films as well as performing arts programming.

Interest is building.  Blogs, tweets, messages boards and other social media help fuel the drama before and after each episode.  A visit to bravo.com gives viewers a chance to access exclusive content, adding to each show’s brand awareness and advertising potential.

It’s hard to forecast the life cycle of reality television.  No doubt it changed the way people watch TV. Today there’s a reality show on almost everything from food to fashion.  Bravo and other networks may be hardpressed to continue to generate viewer interest for reality shows.  But heck, CBS aired “The Guiding Light” soap opera for 72 years, so reality TV might be around for some time.