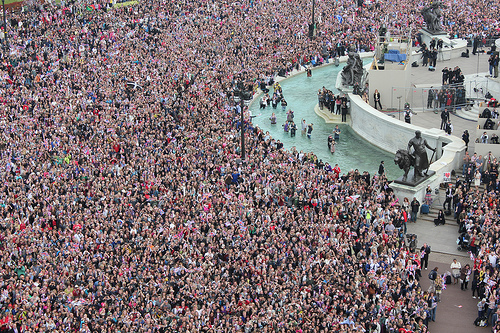 About one billion people worldwide tuned in this Friday to watch the royal wedding of Prince William and Kate Middleton. The drama increased as the wedding at Westminster Abbey drew closer, fueled by 12,000 journalists on hand to cover the imperial nuptials.

The overall reaction among media pundits have been mixed, with many believing it was unnecessary to have so many press reporting on the event, especially here in the U.S. with two wars and new fighting in Libya.

Coincidentaly, nearly two thirds of Americans polled by the Pew Research Center said the wedding has gotten too much coverage even before Friday’s ceremony. This didn’t stop however the millions of tweets and Facebook posts about the newlyweds sent across the Web in the last two weeks.

So why the media fascination? Human interest is still a big driver of news. While factual and unbiased reporting on business and political affairs are important, the reality is people are drawn to news events that have some kind of humanistic appeal, a royal fairytale wedding being one of them.

The dress, the hats and pomp and circumstance were big talk around the millions of office water coolers across the globe. People are drawn to these types of stories, and are usually taken in by the lure of celebrity figures in entertainment, business and politics.

Even though people say they are not interested in these types of stories, they still buy tabloids and go online because of an innate curiosity. Maybe it’s just human nature, or sensationalism news is more exciting than watching Congress debate deficit reductions. Either way, we’ll continue to see these stories evolve and get covered in the press, until the next big story, such as the death of Osama Bin Laden.