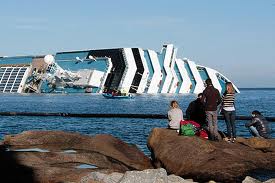 Carnival Cruise Lines has been mysteriously quiet from the sinking of one of its ships off the Italian coast on January 13, resulting in 13 dead passengers and 19 still missing.

The doomed vessel was operated by Costa Crociere SpA, a division of Carnival Corporation based in Genoa, Italy.  Pier Luigi Foschi, who heads up the company’s Italian division, has been the primary spokesperson managing communications surrounding the Costa Concordia cruise ship disaster.

Aside from being quoted in a few press releases and sending a couple of tweets, Carnival’s CEO Micky Arison has been pretty much mum about the incident.  While this strategy intended or not, may temporarily distance Carnival’s other brands and 101 ships from the current tragedy, it’s all too reminiscent of the BP oil spill in 2010 that led to the ouster of CEO Tony Hayward for his aloofness and mishandling of the Deepwater Horizon explosion, killing 11 workers and dumped close to five million gallons of crude in the Gulf of Mexico.

It may to be too early to start drawing similarities between Arison and Hayward, but the messaging coming out of Carnival seems to be spinning out of control.  Nobody is taking responsibility for the accident, with Carnival blaming the the ship’s captain, Francesco Schettino, who in a public relations maneuver, steered the vessel too close to shore hitting a rock that tore a large gash in its hull, causing it to keel over.  The captain is being held on manslaughter charges and denies any wrongdoing; although it is reported that he abandoned the ship before the evacuation of crew and passengers was complete.

Carnival needs to get ahead of this story fast and more leadership and communication is vital to this success.  Gotcha journalism coupled with a capsized ocean liner makes for an international story that not only impacts Carnival Corporation but an entire cruise ship industry as well, which has remained relatively unscathed until now.

Carnival’s stock has taken a hit since January 13 but is starting to recover.  While the loss of the Costa Concordia will affect future sales and profitability, negative perceptions also can impact the company’s bottom line, just as it did with BP as tens of thousands protested and boycotted the oil giant.

This disaster will continue to be covered  as today’s 24-hour news cycle needs to be filled while more Americans are consuming news than in a decade.  If Carnival Corporation can’t turn this story around soon, then the proverbial ship may soon sail into uncharted waters.