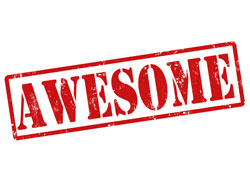 Just type the word awesome into a Google search and about 1,300,000,000 results will appear. The word is so ingrained into our popular culture, it’s hard not to watch anything on TV or go anywhere without someone using “awesome” to describe something cool or hip.

Countless articles and hundreds of thousands of pages on the Internet are dedicated to the overuse of the word. Several print and online magazines have put awesome on their list of banned words, including an article in the PR Industry’s trade magazine Ragan.com, saying, “let’s stop using it [awesome] as our default every time we are too lazy, busy, insecure, stupid or whatever to think of a more original or relevant word.”

Originated in the late 16th century from the words “awe” and “some,” awesome, according to Merriam-Webster’s dictionary, is an adjective that means causing feelings of fear and wonder or awe. Believe it or not there’s “awesomeness” as a noun and “awesomely” as an adverb. Oy vey.

As experts in the communications field, we try to avoid using jargon, slang or clichés to describe a product or service, or anything for that matter. Let’s not even get into words like disruptive, innovative or state-of-the-art. Those words can make any good writer cringe.

According to some writing experts, there are scores of other words that can replace awesome. Amazing?  Maybe, but probably number one on the list of the world’s most overused word. Brilliant? More of a British correlation. Dazzling? Let’s get real. Fabulous? Just doesn’t feel right. Spectacular? Boring.

The truth is there is no real word that can really mimic the same visceral reaction or meaning evoked by the word awesome. The problem is that awesome is used for pretty much everything, from describing a great-tasting doughnut to recounting MLB’s 2015 Home Run Derby. Finding new and exciting words will evolve over time, but until then, it’s hard to deny the awesomeness of awesome, unfortunately, that time may have gone and went.