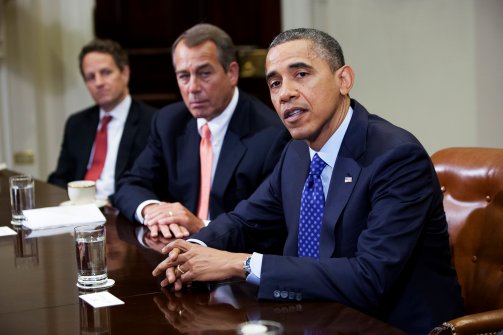 Two things can happen in the next couple of weeks.  One, we may go off the fiscal cliff if the president and GOP don’t hammer out a budget deal.  And two, the world will end on December 21.

Some cynics believe there’s a greater chance of Nostradamus’ end of days prediction will come true, rather than President Obama and House Speaker John Boehner agreeing on a balanced budget amendment.  Ok, maybe that’s a little farfetched, but the financial markets and America’s bond rating stand in the balance.

Comedians, political pundits and TV talk show hosts all have opined on the fate of the economy over the last several weeks.  The media frenzy has everyone watching, even impacting the stock market on rumors of a deal.  No one really understands the full impact of the fiscal cliff, whether it’s more hype than reality, or just another Y2K in the making.

Originated by the Republican-dominated Congress, the “fiscal cliff” may now come back to bite them in the proverbial bum.   Coming on the heels of a substantial November win, President Obama seems to be in the driver’s seat, putting Boehner’s Congress on the defensive and certain blame if a deal is not hatched.

So what’s the next move?  Do we go over the cliff?  Do we plow ahead 150 miles per hour in “Thelma and Louise” fashion, soaring into the sky in free fall?  Unfortunately, we can’t take that chance with a still struggling economy.

While the president and Boehner may be righteous in their beliefs, both must tread carefully given voter fatigue and the public’s reluctance to rehash the 2012 presidential election all over again.

Be that as it may, the president and speaker are advancing their agendas via national media, or at least trying to, both knowing very well they still have time before the December 31 deadline.  Soon we’ll find out if any of these prophecies will come true.   Odds are there’s a 50-50 chance at least one of them will happen.