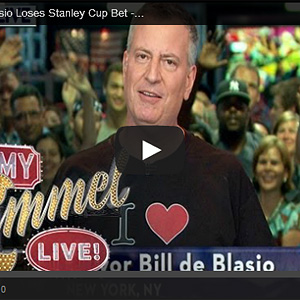 The LA Kings decidedly beat the NY Rangers during the 2014 Stanley Cup Finals, clinching the title in dramatic fashion by winning game four at home in a double overtime 3-2 thriller, forcing the Big Apple mayor to pay up.

Aside from his awkwardness as a singer and performer, de Blasio was gracious throughout the entire skit, even after Garcetti’s comment about Gray’s Papaya franks tasting “like a steaming bag of New York garbage” compared to Los Angeles favorite Pink’s Hot Dogs.

It’s unclear why the first-term mayor would make such a rude comment, even prompting Kimmel to “take issue” with the remark as the late night host chomped on a Gray’s Papaya hot dog given out to audience members courtesy of NYC’s Mayor de Blasio.

But this is only half the story.  Earlier that day, Garcetti blurted out an f-bomb during a televised LA Kings celebration rally.  Many of the players were advised in advance not to use profanity, especially since many youngsters would be in attendance.

Apparently, the mayor’s crude outburst was planned because he began his remarks by saying two things elected officials should never do, “never take a photo with a drink in your hand and never curse.”  That’s when he said, “But this is a big f—— deal.”

While there are worse offenses committed by elected officials over the years, cursing ranks pretty low on the spectrum.  But the mayor is representative of the people who elected him, and not all Los Angelinos need to use profanity to express excitement and elation.

Whatever Garcetti’s future political aspirations, hopefully it’s filled with motives of alliance building and no curse words.  A good place to start can be at the 82nd annual U.S. Conference of Mayors.  Either way, while crude and rude comments may make headlines, they’re not the type of press coverage for building a sustainable brand in the public’s eye. 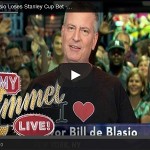