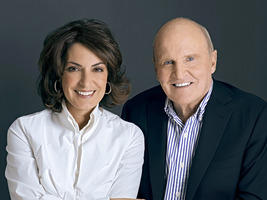 It came to no surprise among media pundits that Time Magazine’s Managing Editor Richard Stengelwill be taking a job as a spokesperson for the U.S. State Department.  His new title, under secretary of state for public diplomacy and public affairs, will have Stengel leading communications outreach for the department across many issues ranging from cultural programs to terrorism.

Journalists historically have transitioned from hack to flack, probably more so in recent times as traditional news outlets struggle to survive in today’s Internet-based media landscape.  Democrats aren’t the only ones making the switch.  President George W. Bush in 2006 appointed former long-time journalist and Fox News host Tony Snow as White House press secretary, whom since passed away due to cancer.

It’s hard to deny these media moves don’t affect the credibility of journalism or at least each reporter’s former news outlet, although it’s hard to control an individual’s career path once they leave a job.  Reporters accepting positions at organizations they once covered can create an allure of collusion within an industry that prides itself as being vigorously independent, unbiased and objective.

Journalists are not only leaving for politics.  Business reporters for decades continuously have taken jobs at public relations agencies as well as within internal corporate communications departments to focus on media and investor relations.

The pendulum swings both ways, however.  Scores of political officials and business executives ranging from Alaska Governor Sarah Palin to former General Electric CEO Jack Welch have transitioned to various media gigs such as talk show hosts and media contributors.

Politics, business and journalism always have had incestuous relationships.  This certainly will continue despite negative perceptions due to the close links among those that create news and those that cover it.  Now with New York City’s primary elections over and Anthony Weiner and Eliot Spitzer losing their bids for mayor and comptroller, respectively, all eyes will be on which politician will be the next cable media pundit.