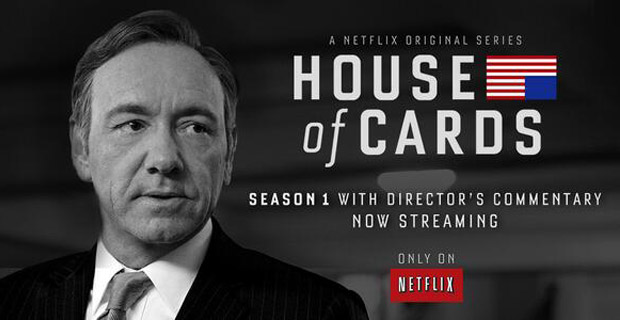 Frank Underwood was probably right when he said, “There’s no better way to overpower a trickle of doubt than with a flood of naked truth.”  The maniacal politician played by Kevin Spacey in Netflix’s original hit series “House of Cards” continues to excite fans and gain industry recognition for a second straight season.

Netflix made history last year when it became the first non-TV network to win an Emmy, three actually, with one going to David Fincher for best directing for the political drama series.  The online video streaming company received 31 Emmy nominations this year, including 13 going to “House of Cards” and 12 for season one of “Orange is the New Black.”

What makes Netflix different than traditional award-winning networks such as HBO is that the full seasons of its original series shows are released at once, delighting binge watchers everywhere.  Season two of “Orange is the New Black” already is online.  So please, no spoiler alerts.

No doubt the strategy is working.  Netflix (NFLX) stock and subscriber base are at all time highs.  With good expected 2Q 2014 earnings to be announced on Monday, the company continues to invest in production and international expansion.

Pumping out consistent hits is not easy, however, no matter how much money is thrown at development.  It’s also easy to assume this is even more crucial for Netflix because of its decision to unload all of its series content at once.

But Netflix is changing the way people watch television, giving viewers the opportunity to stream content when and where they want.  It’s this competitive edge that truly separates Netflix from traditional broadcasters, where weekly episodes keep viewers tuning in to see what’s next.

That’s great news for advertisers, but Netfliix is about subscribers.  While the company’s decision to release all of its original series content in one swoop is great marketing, it’s really nothing new for Netflix.

All of its content is always available, whether it is a multi-episode documentary or a full season of the latest hit TV series. Original content released weekly doesn’t make much difference for Netflix.  The new content, however, and the awards it receives, generates media coverage and builds brand awareness for Netflix, which ultimately brings in more subscribes.

While we may never know exactly how many subscribers watch its shows like “House of Cards” and “Orange is the New Black,” Netflix currently is firing on all cylinders, at least until the Internet goes down and customers cancel their subscriptions.

Right now, all eyes will be watching on August 25 during the 66th Annual Emmy Awards when Netflix may continue to make Internet-TV history.